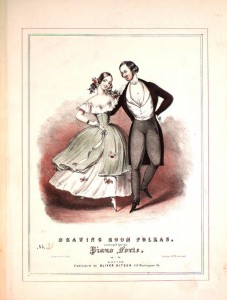 When Mr. Fitch, Hamilton’s first resident dancing master opened his dancing school over Mr. Clark’s store on King Street in November of 1845, Hamilton was already a dancing community. As early as 1827, newspaper accounts of both balls and dancing assemblies are recorded in the weekly press. Accompanied by a late evening supper these, popular events were held at the Burlington Hotel on King Street East between Catherine and Mary Streets, and at Plumber Burley’s Promenade House situated at the corner of King and James Streets in the heart of the village. Dancing was also a favorite form of entertainment at house parties. Some of the most popular parties were given at the home of the City’s founding father, George Hamilton. 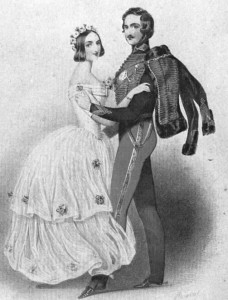 Hamilton was very fond of dancing and gave frequent parties at his home which was located at the top of John Street. Dancing was the featured entertainment at these gatherings. Mr. Hamilton’s mother, Mrs. Jarvis, who was eighty-five years old, danced as well as anyone.

In the mid-1830s when the elite British merchant/manufacturers began to arrive in Hamilton, the cultural milieu of the community began to change. Like all emigrants, when they arrived they brought with them more than their material possessions; they carried the treasures of their heritage as well. They brought their customs of music, dancing, painting, and a love of theatre as entertainment. Having transported these customs to the “New World,” it was essential for them to establish and encourage their practice, because it was through the arts that the upper class could maintain their cultural standards and be different from the lower class.

Social dancing assemblies and balls were a regular and popular source of entertainment for Hamilton’s elite. They provided the gentry with the opportunity to congregate in a refined social setting with their peers; and, although the standard of social etiquette at these gatherings was high, they provided an enjoyable recreational evening of dancing, dining and conversing with friends. 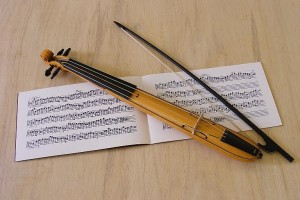 The type of violin used by Mr. Fitch to accompany his dancing classes

The dancing highlight of the season was always the St. Andrew’s Society annual ball held at the Promenade House. Attended by the area’s most influential people, the guest list included the Hamilton’s, Sir Allan MacNab, and Mrs. William Johnston, the daughter of Six Nations Chief Joseph Brant. Sir Allan always attended in full highland dress, while Mrs. Johnston, a handsome, intelligent woman and an enthusiastic dancer came attired in her native Indian dress.

Enthusiasm for these events is attested to by the number and quality of reviews published in local newspapers. Reviews state that balls and dancing assemblies sponsored by the Masonic Brethren attracted hundreds of people and extended into the early hours of the morning.

The popularity of social dancing went beyond the assembly rooms. A number of large houses owned by the elite had ballrooms that were used for private house parties and balls. Sophia MacNab, daughter of Sir Allan MacNab wrote in her diary. “Aunt Maria gave us an account of the ball (at Dr. Hamilton’s,) she said it was very pleasant and there were nearly a hundred people at it.

Since dancing assemblies in Hamilton were held on Friday evenings, and many of the attendees were from out-of-town, it seems likely that some of those attending were the invited weekend guests of relatives or friends. Hence, private ballrooms (like Dr. Hamilton’s) probably became gathering places for the elite on Saturday evenings.

Dances enjoyed at these events followed the British repertoire including the polka, quadrille, lancers, gallop and Scottish country dancing. Scottish country dancing held a priority place in Hamilton because of the large group of Scottish immigrants who had settled in the area. Accompanied by a local fiddler and piper, strathspeys and reels resounded through the ballroom.

During the early times in Hamilton’s history the popularity of social dancing as recreation is not difficult to explain. In a society that was largely responsible for its own entertainment, dancing assemblies and balls had the ability to bring together great numbers of people and unite them, if even for a short time, in friendship. During the long months of a Canadian winter when access to the outside world was limited, this meeting through dance provided an important social and recreational outlet. 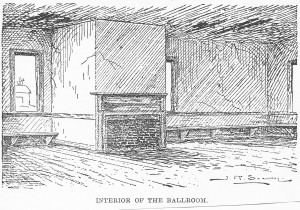 The Terryberry InnRef. Mrs. Dick-Lauder, Mrs. Carr, R.K. Kernighan, J.E. Wodell, J.W. Stead, J. McMonies, and others. (1810-1897) was located on Hamilton Mountain near the present day location of the Terryberry Library at the corner of Mohawk Road and West 5th Street. The ballroom is representative of early nineteenth century space used for dancing events. Note the bench seating around the perimeter of the room.