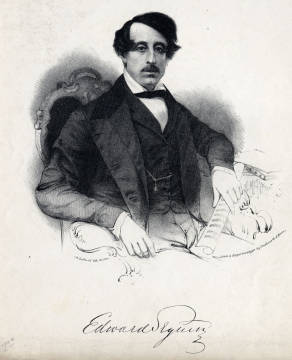 Hamiltonians have always enjoyed the art of vocal music. Choral societies, quartet clubs, glee clubs and choirs as both recreation and entertainment were enjoyed in the community as early as the late 1830s. Opera, however, was a relatively latecomer to Hamilton’s musical scene, not making its debut until the late 1840s when Edward and Anne Childe Seguin performed an evening of Operatic Entertainment at the City Hall. (The former Market/Town Hall was still used for concerts and social events.)

This late arrival of opera in Hamilton, and for that matter in Canada, may have been influenced by several circumstances. McPherson, Kallmann and Paton suggest in their article published in the Canadian Encyclopedia that opera’s slow progress may have been a result of the country experiencing both economic and political unrest, as well as cholera epidemics. It must also be noted that at this time, most Canadian cities had neither adequate facilities nor the financial resources to back either traveling opera troupes or local productions. 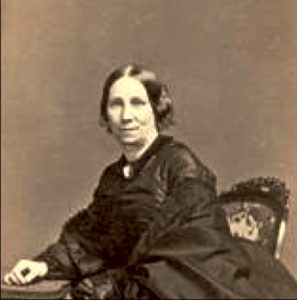 As Canada progressed into the 1840s, opera began to emerge as a culture force. The growing population of towns and cities stimulated economic conditions which led to improved performance facilities, attracting people to theatrical events including opera.

Throughout the 1840s small opera troupes of four to six performers began to visit the more populated communities such as Quebec City, Montreal, Toronto and Hamilton. Regrettably, the size of these troupes prevented the performance of full-length operas which resulted in an evening of what came to be called, “Operatic Entertainments”. Performed in a casual manner, these programs were cut, adapted, and modified to consist mainly of single excerpts, medleys, and at times, truncated versions of operas. 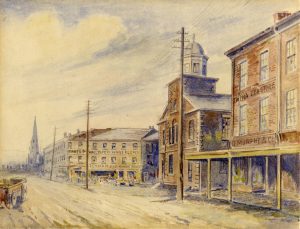 The Old City Hall used for the performance of the Seguin Opera Troupe After a photograph which is reproduced in Lois C. Evans, Hamilton, the Story of a City, 1970, p. 122 (credited to Head-of-the-Lake Historical Society). Shows the city hall on James St. North before the addition of a clock tower in 1873. Date created year approximate for 1913? Toronto Reference Library, Baldwin Room

Anne and Edward Seguin were a fine example of this kind of operatic entertainment. They arrived in America from England in 1838. Prior to this both had enjoyed successful careers in London. Anne was a soprano who had studied at the Royal Academy of Music and performed with the well-known Jane Shirreff and John Wilson Opera Company, as well as appearing in opera at the King’s Theatre and at Drury Lane. Edward was a bass baritone had performed regularly with the Covent Garden Opera Company and at Drury Lane. He was also closely associated with Shirreff and Wilson and it was with them that the Seguins came to America. Shirreff had been recruited by James Wallack for his National Theatre in New York City. When Shirreff and the other British singers she had brought with her returned to Britain, the Seguins decided to stay. It was a wise choice. Forming their own troupe they quickly became great favorites primarily because the operatic works they performed were offered in English translation. Singing excerpts from operas such as La Cenerentola, La Sonnambula, Il Matrimonto segreto, and La Gazza ladra they proceeded to dominate opera in America for the next ten years. 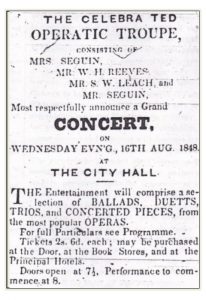 The four singers gave one performance only on the evening of Wednesday, August 16th, 1848. Anne and Edward Seguin were supported by a Mr. W.H. Reeves and a Mr. S.W. Leach. Their program presented ballads, duets, trios, and concert pieces from the most popular operas of the era.
However, if the three hundred Hamiltonians who crowded into the City Hall auditorium on Wednesday evening were looking forward to an uplifting evening of “Operatic Entertainments” they were destined to be terribly disappointed. The Hamilton Spectator critic gave the quartet a devastating review.

The reputation of the Seguin’s is so well established in Canada, that any remarks on their performance may appear, unnecessary: but nevertheless, we must say, distinctly, that the audience were disappointed and dissatisfied, and that in our humble opinion the entertainment was far below mediocrity. We know that the party could have done better and consequently we are at a loss to account for their very cavalier treatment of a western audience. If they fancied that they had reached the extreme bounds of civilization and that the Hamiltonians were a parcel of boors attracted by the prestige of an acquired reputation, we desire to set them right, and not only them but any others of a similar stamp, who visit Canada to kill time or in the search of l’argent. This much we will assett (sic) and defy any person acquainted with the Province to gainsay that for musical taste, talent, and cultivation, the upper classes in Hamilton will contrast favorably with those of any city in the Province. The people who attended the Concert on Wednesday did not do so from curiosity, so that if the singers presumed upon the ignorance of their patrons they made a very great blunder.

The reviewer did compliment Anne Sequin for her rendition of Donizetti’s air lo l’udia and remarked that she sang beautifully the ballad I dreamt I dwelt in marble halls from The Bohemian Girl by Michael William Balfe. However, even though the critic did say that Mrs. Sequin sang with great artistic skill and considerable effect, it was felt that “the sweetness which is often more desirable than an evidence of cultivated talent was wanting.” Edward Seguin was complimented regarding his performance of Non più andrai (You shall go no more) the aria for bass from Mozart’s opera The Marriage of Figaro. Mr. Reeves and Mr. Leach were severely chastised for their decidedly inferior singing. The critic referred to the rendition of the ballad, Then you’ll remember me, sung by Mr. Leach as, “positively execrable—not a word was pronounced—no execution was attempted—and the gentleman strummed along with about as much expression as a boarding school miss, or a school boy who desired to hurry through his task with all imaginable speed.” Mr. Reeves fared no better with the critic who said that if he presumed to sing the way he did in New York or Philadelphia he would have been hissed off the stage.

Perhaps some of the blame for the troupe’s lack-luster performance can be found in the fact that at this point in time both Anne and Edward were coming to the end of their professional careers. Their troupe who had dominated the opera circuit in North America for more than ten years was simply no longer at their best vocally, and too, they were quickly going out of fashion. One of their featured strengths was that they sang their performances in English, but in the late 1840s, with the arrival in America of the Havana and Marti opera companies and Italian individual singers, who sang in the original languages, the Seguins failed to draw audiences. It was a new era. Audiences now wanted their opera sung in its original language by singers who were at the top of their profession both as vocalists and artists.

Anne Seguin made her last appearance in an opera in 1852 at the Broadway Theatre in New York. After her husband’s death from tuberculosis in the same year she retired to teach music, although she always took a role in opera production. She died in New York in August of 1888.