France ceded New France to the British, after the signing of the Treaty of Paris in 1763. The first known French-speaking professional theatrical performance at Quebec (City) was announced in the Quebec Gazette, April 11, 1765. The advertisement said that a troupe of comedians with the permission of His Excellency the Governor (James Murray) and the Magistrates of the city would give a theatrical performance of Le Festin de Pierre (The Stone Feast) on April 15th, at Jean Roi’s Inn. Located in the Lower Town on Saint-Pierre Street, Roi’s Inn was known as At the Sign of Quebec.

It is interesting to note that the Governor General James Murray allowed the troupe to give a theatrical performance in the colony, even though Murray wasn’t in favor of French-speaking entertainers from France. The political and emotional tension between the French and the English arising from the Seven Years War (1756-1763) as well as the surrender of New France to the British in 1763 was still felt.

1. Dominique’s troupe, although they were French-speaking were not French citizens; having experienced political discrimination while touring in Britain before his trip to America, Dominique had reorganized his troupe by using actors who were citizens of Britain, Milan, the Netherlands and Switzerland thus avoiding the French/English conflict. Since the members of the troupe were not French, Murray obviously relaxed his political apprehensions and allowed the troupe to come into Quebec. 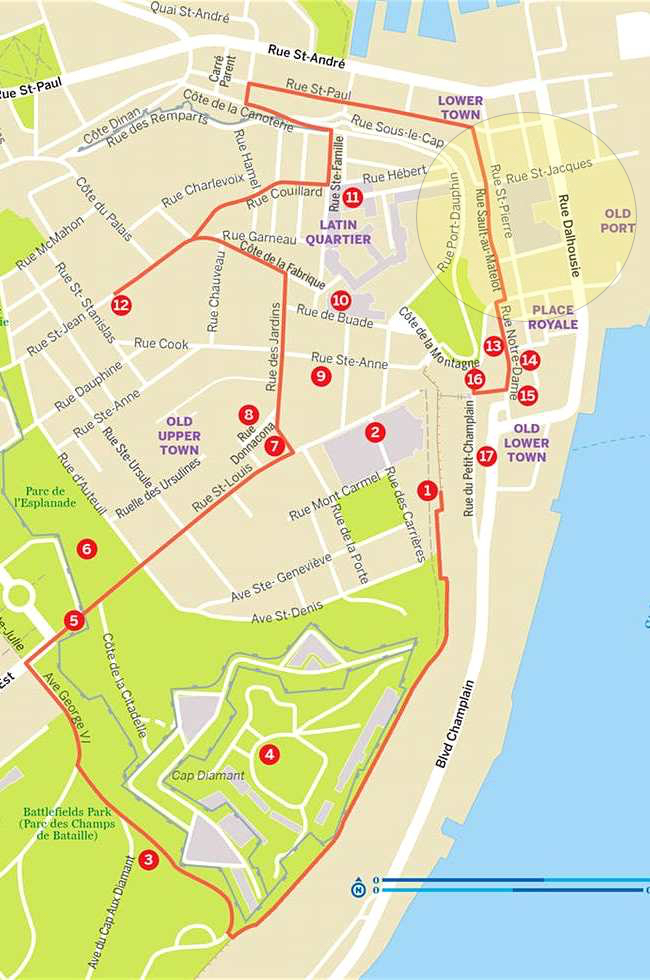 The troupe was managed by Monsieur Dominique, a Swiss actor and acrobat from Bern, Switzerland; it included one woman, Madame Nina, and five men, the “sieurs” Colin, Grivois, Silva, Zeliot and Dominique.

Their first performance in America was in 1763 in New York City;  it may have been given as part of the centenary celebrations for the capture of New York by the British from the Dutch in 1664.

Previous to their arrival in America, Dominique, his wife, and young daughter were members of the Grande Troupe Êtrangère from 1742 to 1751. Operated by the Restier family, the troupe performed regularly at the annual Saint-Germain theatre fairs held in Paris since Medieval times. The fair was held simultaneously with Easter celebrations and generally lasted three to five weeks.

A fire destroyed the Foire Saint-Germain on the night of March 16, 1762 Wikimedia Commons

The Foire Saint-Germain after its reconstruction in 1763. A parade, a short comic entertainment to entice passersby to buy tickets, is being performed on the balcony of Nicolet’s theatre. Wikimedia Commons

During the interlude between fairs, Dominique’s troupe travelled throughout Europe and the British Isles in search of performing opportunities. In June and July of 1742 Dominique appeared as a tumbler with Hendrick and Kerman’s troupe at Sadler’s Wells in London, and in July of 1743, he was at Stoke’s Croft, Bristol. In 1744 at New Wells, Clerkenwell (in North London) he threw himself over twenty-four men with drawn swords. The following year his company returned to Stoke’s Croft along with his wife and four-year old daughter Polly, who was now performing with the troupe. By 1751 he turned up in Glasgow where he thrilled the Scots by flying over a double fountain.

There is no information regarding their location from the time they performed in New York (1763) and their arrival in Quebec in 1765. Nor do we know where the troupe was between April 15, 1765 when they began their performance at Roi’s Inn and when they next appeared at a festival in a Township close to Quebec in November of 1765. However, a Gazette advertisement for October 24, 1765 suggests that they may have toured the Townships next to Quebec.

5. For French and English translation of the advertisement see Appendix 2.

The advertisement says that Dominique, Silva, and Crivois were “always applauded in this part of North America.” It could follow that this is a reference to other townships surrounding Quebec (City).

At Roi’s Inn Dominique’s troupe performed the comedy Le Festin de Pierre, or simply The Stone Feast, a Harlequinade which was written by Domenico Giuseppe Biancolelli in 1658. (This should not be confused with Molière’s play of the same name first performed in Paris on February 15, 1665, in the Théâtre du Palais-Royal. )

View of the Palais-Royal in 1679. The theatre was in the east wing (on the right). From Wikimedia Commons, the free media repository Site of Biancolelli’s and Molière’s performances

The October 24 edition of the Gazette gives very useful information about the sponsors of the Festival in the Township, performances by Dominique’s troupe, and other events that were part of the festivities.

The sponsors were a group of women living in a Township close to Quebec, who referred to themselves as Les Villageoises Canadiennes (Canadian Women), new Subjects of the British King. The advertisement says that the Festival was held in honor of their Lord Patron and Protector Murray and would take place on November 18, 1765. The Gazette noted that the shepherds of the Township lent support to the Festival by joining four barns to create a large room for the entertainment and the closing grand ball. In addition to joining the barns, the shepherds also contributed to the Festival expenses by donating their current year’s superfluous income earned from tending their flocks.

The Festival was to be “on the coast.” However, its location was not to be announced until three days before the event to prevent any confusion about where the Festival would take place.

Detailed information about the program and its organization was also announced in the advertisement. Notice was given that no one would be admitted to the Festival without a ticket and that guests were to enter through the front door and exit by the back door. Admission to the event was 24.11 shillings per person paid to the front door attendant. This admission charge was to cover small pleasures such as refreshments as well as a donation to the needy. Twenty free tickets were distributed to girls that would like to attend, but who did not have the means to do so. The starting time for the Festival was five o’clock in the evening.

By Permission of His Excellency Monseigneur the Governor, and of Messieur:
the Magisirates of this City
Sir Pierre Chartier, and a Troupe of comediennes, propose to give to the public, next Monday, the 15th of this month, a Comedy Piece, entitled The Feast of Pierre, (The Stone Feast?) followed by several Turns of Balance: (acrobatic feats) – a La Baffe City (that will amaze the City), at the Ensign of Quebec, at Sir Jean Roi,(Roy’s) where the Men (patrons) will find all sorts of Refreshments. Tickets will be distributed at the Sign of Quebec (Inn), Saint Pierre Street, at Jean Roi’s (Inn): The prices (admission) are two dollars, one dollar, and two and a half shillings.

New Show and Entertainment The Canadian Women, new Subjects of his Britannic Majesty in a certain Township in the province of Quebec, will come together and give a Festival in honour of their Lord Patron and Protector on Monday the eighteenth of November next. A new play in one act titled The Villagers Festival Comedy, will be followed by a Ballet of Shepherds and Shepherdesses, and given in honour to our Patron and Protector. In between the comedy and the ballet will be a Cantata and a duet sung by Sir Colin and Miss Nina, famous musicians of Canada. The latter will sing a piece chosen from the Opera of the Loves of Venus. Finally there will be three character dances Sir Dominique dances the Harlequinade, Sir Silva dances a Sailors Hornpipe, and Sir Crivois, a Chinese dance. All three are great dancers, who have always been applauded in this part of North America. The orchestra and the symphony will be composed of all kinds of instruments with one bagpipe (Cornemuse.) The whole will then close with a big Ball in the best order that can possibly be done. There will be all kinds of refreshments so that everyone will be happy. We will ensure that Bacchus and Venus agree to this gathering so that the festivities may have no problems. The zeal with which the shepherds of this coast lent themselves up to give this brilliant festival made them put all their effort into an expression of the Quebec Bourgeois. To gather together and join four barns in a short time to make a beautiful room for the Comedy and Ball, and toilets for convenience, and finally in order to contribute to the expenses of this brilliant party the shepherds were willing to give up a year of their superfluous pay from their land/farms. The script for the Comedy was written by Sieur Lanoux, the celebrated poet of Canada, and the music for the Cantata and the Duet were composed by Sieur Zeliot a famous musician. The event begins at five o’clock in the evening. The public will be given three days notice of the place of the festival to prevent confusion. All will enter the entertainment space by the front door, and come out by the back door. No one will be admitted without a ticket that costs $24.11 (shillings & pence?) that must be paid to the door attendant for small pleasures. The number of tickets will be one hundred, and we are requested to make the arrangements for the feast, and we would love to give some money to the poor. Twenty free tickets will be distributed to girls that would like a night out, but do not have the means to do so.