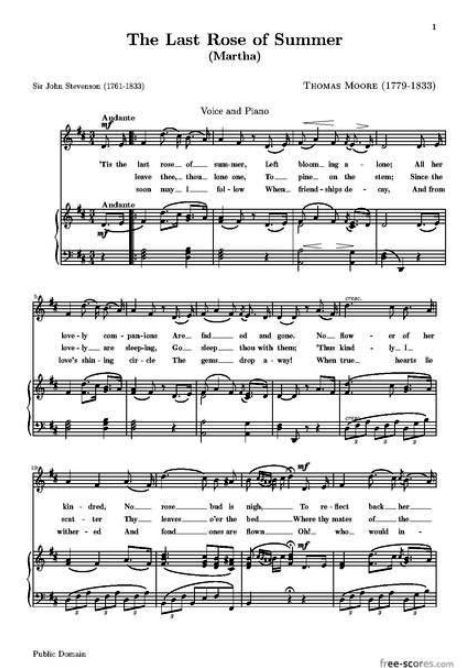 Sheet Music for The Last Rose of Summer
http://en.wikipedia.org/wiki/The_Last_Rose_of_Summer

Exactly what the Vaughan troupe offered as incidental entertainments is unknown. However, songs, dances and recitations were all popular with audiences. Two of the most popular songs of the day were Thomas Moore’s, The Last Rose of Summer, and Lo! Here the Gentle Lark by Sir Henry Rowley Bishop. Favorite dances included the Irish Jig or Sailors Hornpipe, and comedy dances performed in characteristic costume. Musical accompaniment for the between the acts entertainment was likely the violin played by a member of the troupe or a local musician.

The Vaughan’s troupe repertoire was contemporary with those being presented on the stages of established theatres in Canada and the United States. This indicates that Hamilton, regardless of its small population, was keeping up with current theatrical trends.

Where they played following their 1828 Hamilton performance is not known. This is not unusual, since many of these early theatrical companies lacking a permanent home wandered from town to town, playing in whatever space the community could provide, and staying as long as receipts were good. 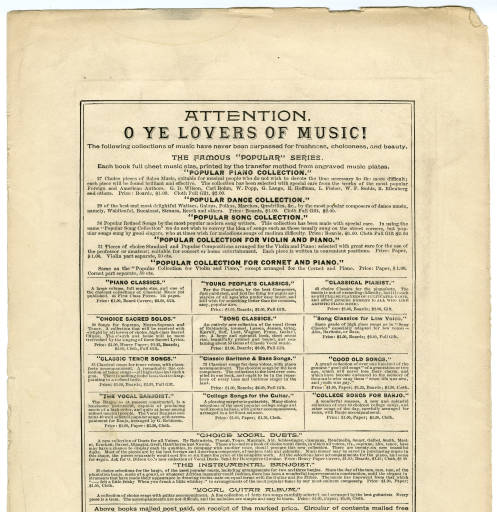 Ancaster, a small village to the west of Hamilton, formed an amateur society in 1826. However, according to Sol Smith, a well known, American actor/theatre manager, the Ancaster group never gave a performance.

In his book Theatrical Management in the West and South for Thirty Years, Smith gives this amusing story. In 1828 while traveling in Upper Canada, Smith and Company stopped in Ancaster to give a performance. No sooner had the company arrived in the village when Smith was approached by a gentleman who requested the company perform the play, She Stoops to Conquer. When Smith asked the gentleman why he would like to see this particular play, he was told the following story. Apparently in 1826 the gentlemen of Ancaster formed an amateur theatrical association.  A sum of two hundred pounds was collected by the members to purchase scenery, wardrobe, and script books. They met weekly for two years to rehearse She Stoops to Conquer, but never progressed beyond the second scene in the first act. Holding their rehearsals in the village tavern, and having no resistance to imbibing, they were always too tipsy to proceed any further. Consequently, they never did get around to performing the play, since their rehearsals generally ended in a drunken row. Smith’s company obliged by performing the requested play, and received a rousing ovation when they successfully completed the first act.