Hamilton’s rich musical history begins in the early days of the nineteenth century when Hamilton was a small townHamilton was incorporated as a town in 1833. Population 1,367.
located at the head of Lake Ontario. Instrumental and vocal music were both taught in the town by the early 1830s, while band music became established somewhat later (1837) when Drum Major Edward Kelk organized the first civic band.

Edward Kelk a retired British Army bandsman who had served as a military drummer boy under the Duke of Wellington at the Battle of Waterloo arrived in Hamilton in 1837 accompanied by his wife and five children. The Kelk family settled on James Street North near Stuart Street, and quickly became regular participants in the musical life of the community. Adept in both wind and string instruments the family set about earning their livelihood by teaching music at their residence on James Street. In addition to his drumming expertise, Edward also excelled in the horn and fife, and offered instruction in all three instruments. Shortly after the Kelk family arrived in Hamilton, Edward organized the town’s first military band. Many of the band members, like Kelk, were military veterans and newcomers to Hamilton. Named the Hamilton Amateur Band − it proved so successful that it quickly became a regular part of the town’s social entertainment. In 1840 the band became affiliated with the Sons of Temperance organization and changed its name to the Sons of Temperance Band. Among the band’s members were George Hampson and Chris Passmore, both were first class band musicians and among the best singers in Hamilton. 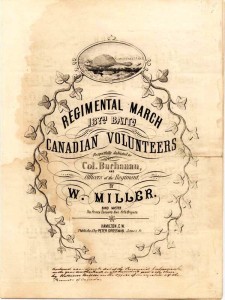 Band Master Kelk was a fine musician and a conservative gentleman who had specific rules on how the Band should run financially. In the summer of 1852 Kelk encountered the wrath of the Sons of Temperance ladies auxiliary. The ladies were planning a soiree in the Mechanics Institute Hall and appealed to Kelk for the services of the Band free of charge. Kelk took great offence to the appeal and refused the request. The disagreement resulted in Kelk and his three sons resigning from the band. Kelk’s successor was Peter Grossman a recent resident of Hamilton who had come to the cityHamilton was incorporated as a city in 1846. Population 9, 889. to open a music store and music publishing business. The Temperance band eventually broke up and was reformed under the name City Band with Grossman as its leader.

In 1856 the City Band became the nucleus of the Artillery Band, and in 1866 it merged with the 13th Regimental Band with Grossman as bandmaster and Edward Kelk as drum-major. Kelk remained associated with the band until his death in December of 1878.

People the world over have always found music significant in their lives, whether for the enjoyment in listening, performing, or creating. In Hamilton at the mid-nineteenth century many of the town’s citizens found great pleasure as participants in the art of choral singing. Between the years 1840 and 1860 there were five active choral groups meeting and performing regularly. Two groups were for men only, The Glee Club for Men and the Hamilton Quartet Club. The ladies sang in the Ladies’ Choral Society and the Hamilton Choral Society. In 1855 St. George B. Crozier started a chorus and orchestra that gave a vocal and instrumental concert in aid of the Patriotic Fund.

In the year 1858 Edward Hilton relocated from Montreal to Hamilton to take up a position with Hamilton’s first Board of Trade. In addition to holding a prominent place in the business community Hilton was also a mover and shaker in Hamilton’s musical circles. He was a leader of prominence from the day he arrived. A skilled musician who excelled in organizing musical events, he organized the city’s first Philharmonic Society, led the Centenary Church choir, and managed several oratorios of which he was director. In 1881 Hilton left Hamilton for Chicago where he became associated with the firm of Aldis & Northcote. He retired from business in 1895 and passed away in Chicago in 1899 from the effects of a stroke.

Hamilton was indeed fortunate to have such musically talented people involved in the early days of its musical history. The legacy these early musicians and singers left to the city is that of a solid foundation in the musical arts that developed into an abundance of good music and good musicians that is still prevalent in Hamilton in the twenty-first century.