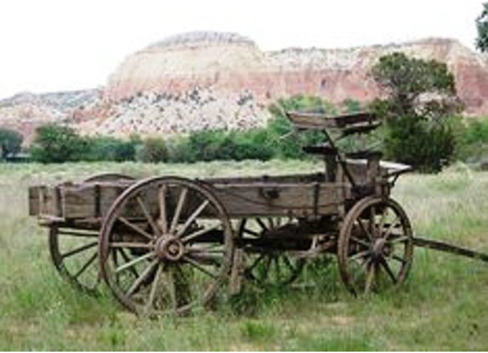 The Vaughan Troupe is the first professional troupe of actors to visit Hamilton about whom there is reliable published information.

According to the Gore Gazette, a local Hamilton newspaper of the era the troupe gave one performance in the village on June 28, 1828 using the ballroom of the Burlington Hotel as a theatre. Located on King Street East between Catherine and Mary Streets, the hotel was leased by Samuel Potts from the owner George Carey.

Under Potts management the hotel accommodated dancing assemblies, balls, community suppers, and the occasional theatrical event. In the absence of a proper theatre, the Burlington’s Ballroom was the only space in the village large enough to hold a substantial audience, which made it an ideal makeshift theatre.

Henry Scadding in his book, Toronto of Old says that the troupe was managed by John E.T.C. Vaughan, and that they had resided in Toronto during the winter of 1827, performing at Frank’s Hotel on Market Lane. In summer, when the roads were passable for travel, the company toured the adjacent towns and villages hoping to bring in a few extra dollars to tide them over the lean summer months. For example; prior to their performance in Hamilton, the troupe had played in Ancaster, Ontario where they had used Mr. Hogebloom’s (sic) Assembly Room as a theatre. 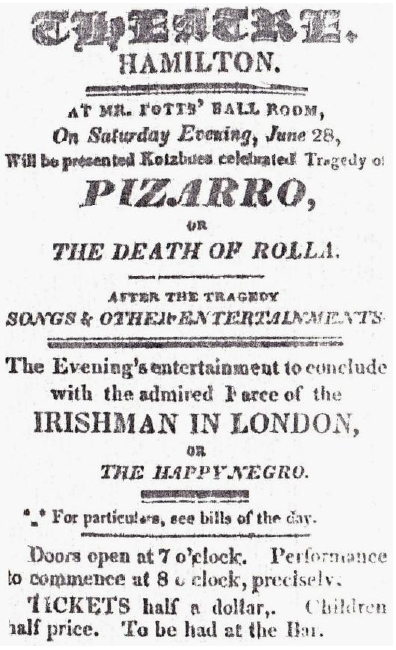 Mary Shortt in her article published in Ontario History LXXVI, says that Vaughan was a small-time itinerant English actor formerly of Drury Lane, London who had been in Toronto as early as 1810, and as late as 1833. Shortt also says that Vaughan specialized not in dramatic roles, but in satirical lectures on the vices and follies of the world.

The advertisement published in the Hamilton edition of the Gore Gazette lists the program performed by the troupe during their one night engagement in Hamilton. It included Richard Brinsley Sheridan’s Pizarro, a tragedy adapted by Sheridan from a play by the German playwright August von Kotzebue, Die Spanier in Peru (1796) and William Macready’s farce Irishman in London or, The Happy Negro (1792) which was an adaptation by Macready of a farce titled The Intriguing Footman, attributed to James Whiteley. The actual title Macready gave to the farce was Irishman in London or, The Happy African.

Between the tragedy and the farce the program featured songs and other entertainments.