Thomas Blades (Bladies) De Walden was born in England in 1811. He made his first appearance on the English stage in 1841. In 1844 he traveled to New York for his premier on the American stage at Park theatre in 1844.

De Walden appears to have been most active professionally during the 1850s and 1860s. He is credited with supporting roles at the Bowery during the 1852-1853 and 1853-1854 theatrical seasons. In addition to acting, De Walden also worked as a playwright; his first play, The Upper Ten and the Lower Twenty was performed in New York at Burton’s during the 1854-1855 season. In his Annals of the New York Stage, George Odell calls this piece a “play of local interest” that was a “really notable success, destined to many repetitions” (6:351).

However, theatre, it seems, was not De Walden’s only career. In 1857 he left performing and writing to begin “mercantile pursuits”, and later, during the American Civil War, he voluntarily served as a chaplain. All of these pursuits eventually led back to the theatre and playwriting. He was a prolific playwright, credited with writing over a hundred plays during his lifetime. He died on September 26th, 1873 in New York. 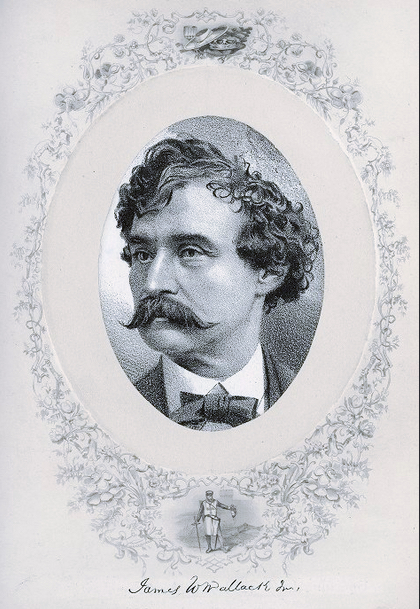 James W. Wallack, Jr. was born in London, England in 1818, and like many actors of his era he was born into a theatrical family, who immigrating to America in 1819. James made his first appearance on the American stage in Philadelphia at the age of three years in the part of Cora’s child in the play Pizarro. By the age of nineteen he was the leading actor in his uncle’s (J.W. Wallack, senior), theatre in New York City.

Young vigorous and handsome he was the most romantic looking actor I ever saw; there was a dash and spirit in carriage, too, that was charming. I say he was at his best in those days, because in after years the acting of Macready, whom as an artist he idolized, had an unfortunate influence upon him as he ultimately became imbued with the mannerisms of the English tragedian, which were so marked that they marred the natural grace of the imitator.

Wallack died of consumption on May 24, 1873 at Aiken, South Carolina.

J.D. Leonard was an Irish comedian whose entire repertory consisted of Irish plays. He made his initial American appearance in New York City at the Park Theatre in 1846. In addition to traveling with the Skerretts he played, in many of the theatres on the American circuit from New Orleans to New York City and Boston. Unfortunately like many of these early theatrical personalities there is very little biographical information available regarding his professional and private life.